RazorSQL contains a SQL editor that includes syntax highlighting and function lookup for many languages such as SQL, PL/SQL for Oracle, Transact-SQL for SQL Server and Sybase, SQL PL for DB2, and support for other popular programming languages like PHP, Java, JavaScript, HTML, CSS, XML, and many more.

The SQL editor also allows users to execute multiple queries at a time using the execute all option, or to execute only queries based on the current cursor position assuming queries are separated by semi-colons. Users can also manually highlight queries they wish to execute.

The SQL editor displays query results in a tabular format. Each query gets its own tab. The query results section includes many features such as one-click editing of data, data searching, filter and sort tools, and data import and export tools.

Normally the default syntax highlighting type is the SQL type. However, if connected to Oracle, SQL Server, Sybase, or DB2, the editor will set the highlighting type to that particular database's programming language, i.e., PL/SQL for Oracle, TSQL for SQL Server and Sybase, and SQL PL for DB2.

Listed below are links to more specific information about some of the SQL editors provided by RazorSQL: 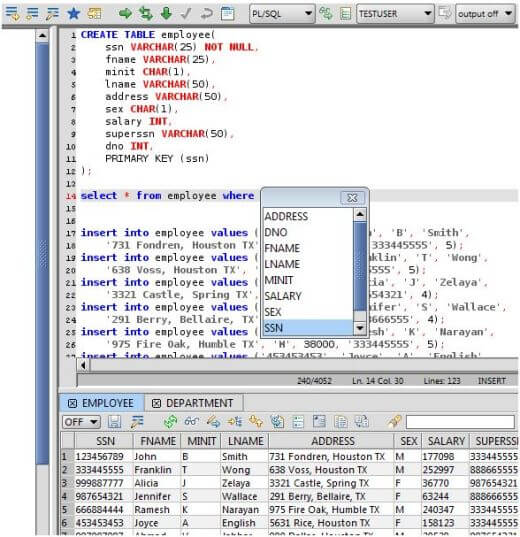